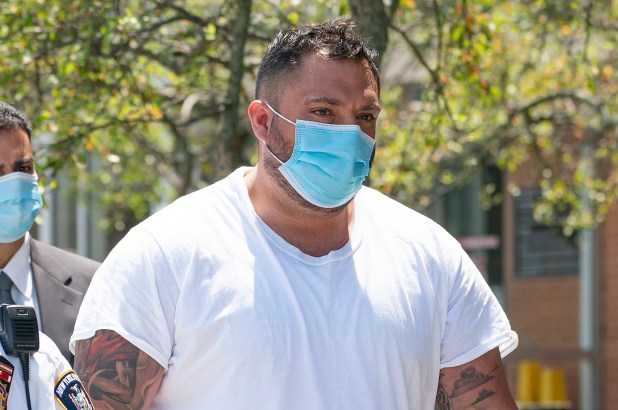 Former Officer Joseph Recca, 28, of West Islip, LI, was busted in July with two co-conspirators on charges of criminal sale of a controlled substance.

A drug-dealing ex-NYPD cop has pleaded guilty to manslaughter for selling a Long Island man the fentanyl pills that caused his fatal overdose, The Post has learned.

Former Officer Joseph Recca, 28, of West Islip, LI, was busted in July with two co-conspirators on charges of criminal sale of a controlled substance, conspiracy and other raps.

“For a police officer to be selling fentanyl — a drug we are acutely aware can be fatal — he is not just breaking the law he is sworn to uphold, but knowingly gambling with people’s lives,” said Suffolk County DA Timothy Sini in a statement.

Authorities began investigating Recca after the tragic 2019 overdose death of Ryan Bornschein, 28, from drugs that the then-cop personally delivered, according to a civil lawsuit.

Recca on Friday copped to manslaughter and other charges in the case in exchange for five years in prison.

The Suffolk County DA’s Office was the first jurisdiction in the state to bring a manslaughter charge against a drug dealer for causing an overdose death in 2016, Sini noted.

“However, just because we have been successful on this front does not eliminate the need for a specific death-by-dealer statute,” Sini added. “We need a law on the books that sends a clear message to drug dealers causing fatal overdoses that these are homicides.”

An evidence photo of items confiscated during the arrest of Joseph Recca.

On Sept. 3, 2019, Long Island cops responded to the scene of Bornschein’s fatal overdose in Copiague. An investigation revealed that Recca had personally sold the victim the deadly fentanyl pills.

Authorities began to surveil Recca and discovered that he and co-defendants Michael Sosa, 25, and Michael Corbett, 53, were allegedly operating a narcotics ring.

After Recca’s arrest, police found a hidden compartment in the dashboard of his car that contained a stash of illegal pills, including 100 fentanyl tablets. They also seized $10,000 in cash and illegal steroids from his home.

The fallen ex-cop, who resigned from the force after his arrest, is currently free on $100,000 bond. He is scheduled to be sentenced May 3.

The cases against Sosa and Corbett are still pending.