From his time as a federal prosecutor to his work as Suffolk County’s Police Commissioner to his current position as our District Attorney, Tim has relentlessly worked towards protecting our community. Tim’s mission has always been to make Suffolk County a safer place to live, work and raise a family, and he’s proud to use his vast experience to continue this mission as District Attorney of Suffolk County.

In late 2019, Tim conducted the largest MS-13 takedown in U.S. history. The investigation resulted in the indictment of 96 MS-13 gang members and associates in Suffolk County and hundreds more across the globe. The almost two-year-long investigation had a far-reaching impact on the safety of not only Suffolk County, but across the country and world.

In January 2018, just weeks after taking office, Tim announced the formation of a Gang Unit within the Enhanced Prosecution Bureau. The Unit focuses exclusively on investigating and prosecuting crimes committed by gang members. Comprised of Assistant District Attorneys and Detectives, the Gang Unit works closely with a multitude of law enforcement officials, including local, state and federal agencies. Their successes include preventing a series of murders in real-time by listening to plans on wiretaps and immediately intervening to save victims’ lives.

Murders Stopped in Real-Time in Suffolk

As a former federal prosecutor and Suffolk County Police Commissioner, Tim knows an important part of defeating gangs requires cutting off their recruitment strategies. As District Attorney, Tim has put in place a number of community-based prevention strategies to help struggling youth that might otherwise turn towards gangs. To fund these programs, Tim has strategically and aggressively pursued—and acquired—a number of federal and state grants.

Aimed at recent immigrant students, “Life in America” is an educational program that introduces immigrant students to schools in American society. The program informs these students of the “rules of the road” for residing in the U.S. and the cultural differences they may experience. Provided in partnership with the Probation Department, “Life in America” gives these students a safe space to ask any questions they may have about how life in Suffolk County is different than in their home countries and gives them the tools they need to successfully transition into their new community.

Tim partnered with S.T.R.O.N.G. Youth, an organization that specializes in youth gang violence prevention, to offer programs in the Brentwood, Wyandanch and Bellport school districts. These programs address gang issues experienced by students and their families, provides counseling in schools and the community, referrals for services, and summer camps and assistance in ESL classes, community service opportunities, and more.

The Suffolk County Sheriff’s Office’s “School to Prison Pipeline” Committee examines the factors that lead young people to incarceration and works to innovate and create systemic change. By joining law enforcement, lawmakers, school officials and human service professionals with impacted individuals, the Committee aims to address the root causes of youth crime and inequities in the justice system.

‘Justice Will Be Done,’ 10 People Charged With Committing ‘Vicious Killing’ For MS-13

Tim knows combating the opioid epidemic requires a nuanced strategy that balances prosecuting drug dealers and major traffickers while providing treatment and diversion opportunities for non-violent defendants who suffer from substance use disorders. In his position as District Attorney, Tim has successfully deployed this balanced strategy with a number of innovative initiatives.

When Tim restructured the Suffolk District Attorney’s Office, he created a new Special Narcotics Bureau to investigate and prosecute major drug trafficking and the dealers peddling poison in our communities.

On the investigative side, Tim and his team use a variety of innovative investigative tactics, including the use of wiretaps and other court-authorized electronic surveillance to catch perpetrators. In partnership with local, state, and federal partners, the Office has successfully disrupted dozens of major drug operations, seized a record number of drugs and illegal weapons from our communities, and issued hundreds of arrests and convictions.

In order to deter future drug trafficking efforts, Tim has fought hard to prosecute these cases to the fullest extent of the law. New York State does not have a death-by-dealer statute to prosecute dealers who cause overdose deaths, which is why Tim has tirelessly advocated State officials to pass such a law, working with New York State lawmakers to draft and propose a bill.

However, while Albany debates the issue, Tim isn’t waiting. He has successfully brought and convicted a number of drug dealers on manslaughter charges instead. The Suffolk County District Attorney’s Office was the first office in the state to convict a drug dealer who caused an overdose death with manslaughter and continues to be a leader in the state on successfully bringing these charges.

While drug dealers and major drug traffickers need to be prosecuted, Tim knows we aren’t going to arrest our way out of the drug epidemic. Those suffering from substance use disorder need compassion, help and most importantly, treatment. As District Attorney, Tim has worked to create a spectrum of diversion programs for non-violent members of the community who suffer from addiction.

The “Preventing Incarceration via Opportunities for Treatment,” or PIVOT, program allows the Suffolk County Police Department to refer people who are burdened by substance use disorder to treatment. The goal of PIVOT is to prevent these individuals from committing crimes to fuel their addiction.

Created in 2020, the Diversion Opening Opportunities for Recovery Services (DOORS) program allows the District Attorney’s Office to refer anyone they come in contact with for treatment, whether they’re a defendant, witness, victim, or member of the community.

In the News: Tim’s Work Addressing the Drug Epidemic

As a father of three, Tim truly understands the importance of protecting our most vulnerable community members from the horrors of human trafficking.

While many people think human trafficking is what we see in the movies, where innocent people are abducted off the street and trafficked across borders, that isn’t the major issue we face in Suffolk County. Instead, traffickers tend to prey upon the vulnerabilities of victims, such as homelessness, lack of a job, drug addiction, fractured family dynamics, mental disorders or other vulnerabilities the traffickers can identify and exploit. More often than not trafficking occurs in plain sight, at the Mall, at a bus stop, a party or other normal locations in our community where a trafficker can spot a vulnerability and prey on a victim. As such, Tim knows it is important to take a multi-faceted approach to human trafficking that both prosecutes traffickers, but treats victims as true victims, and not criminals themselves.

Shifting Our Approach to the Victims of Human Trafficking

One of Tim’s main strategies in fighting human trafficking is shifting our approach to how law enforcement treats sex workers. Historically, sex workers have been treated as criminals—Tim has turned that idea on its head and now approaches sex workers as potential victims of human trafficking. With this new paradigm, Tim has implemented several programs that get these victims off the streets and into services and treatments they need to rescue them from their trafficker and set them on a course to turning their lives around.

During his first year as District Attorney, Tim partnered with the Suffolk County Police Department and the FBI to announce the launch of the Human Trafficking Investigation Unit. Prosecutors assigned to the Human Trafficking Team work on this collaborative, multi-agency endeavor to investigate and prosecute human traffickers, employing a multi-faceted approach.

As a multi-generational Long Islander, Tim knows the importance of protecting our waters. As an island, we are surrounded by water and we get our drinking water from two sole-source aquifers directly beneath our feet. Our water isn’t just part of what makes Long Island such an amazing place to live, it is the key to our future health, economy and property values.

Long Island and Suffolk County have been the victim of illegal dumping for decades, primarily stemming from construction sites in New York City, but also other waste locally. Instead of paying the cost to properly dispose of hazardous waste from construction sites, unscrupulous actors illegally truck their waste out to Suffolk County to attempt to secretly dump it in our parks, wetlands, forests, and even our literal front yards, posing it as “clean fill.” Over time, this pollution enters our drinking water and waterways, and it has become a major threat to our well-being.

In addition, while illegal dumping is a serious public safety issue, Tim also understands that it is a crime that disproportionally impacts communities of color. For years, perpetrators of these environmental crimes preyed on historically underserved communities believing they could dump their waste there and no one would do anything about it.

But now, Tim Sini is doing something about it.

Upon taking office in 2018, Tim empaneled a Special Grand Jury to investigate environmental crimes. Phase One was a criminal case known as “Operation Pay Dirt,” which resulted in a 130-count indictment against 30 individuals and nine corporations for illegally dumping hazardous materials in Suffolk County. It was the largest illegal dumping case in New York State history.

Phase Two of the Special Grand Jury was an investigation into the effects of environmental crime on Long Island and how to more effectively prevent and deter such crimes. Based on their findings, under Tim’s leadership, the Suffolk District Attorney’s Office recommended new legislation to the State Legislature to establish specific crimes related to dumping, including making illegal dumping a felony and increasing penalties for damaging the aquifer.

With Tim’s advocacy and drafting of the bill, this new legislation was passed and signed into law in 2020, and now provides prosecutors better tools to hold bad actors accountable and protect the vulnerable from the effects of pollution in their neighborhoods. Tim will continue fighting every day to keep our water supply clean and safe for our future. 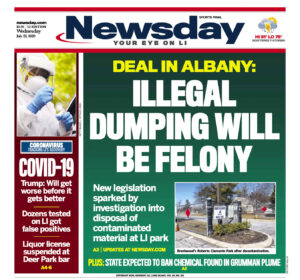 In the News: Tim’s Work Protecting Our Clean Water 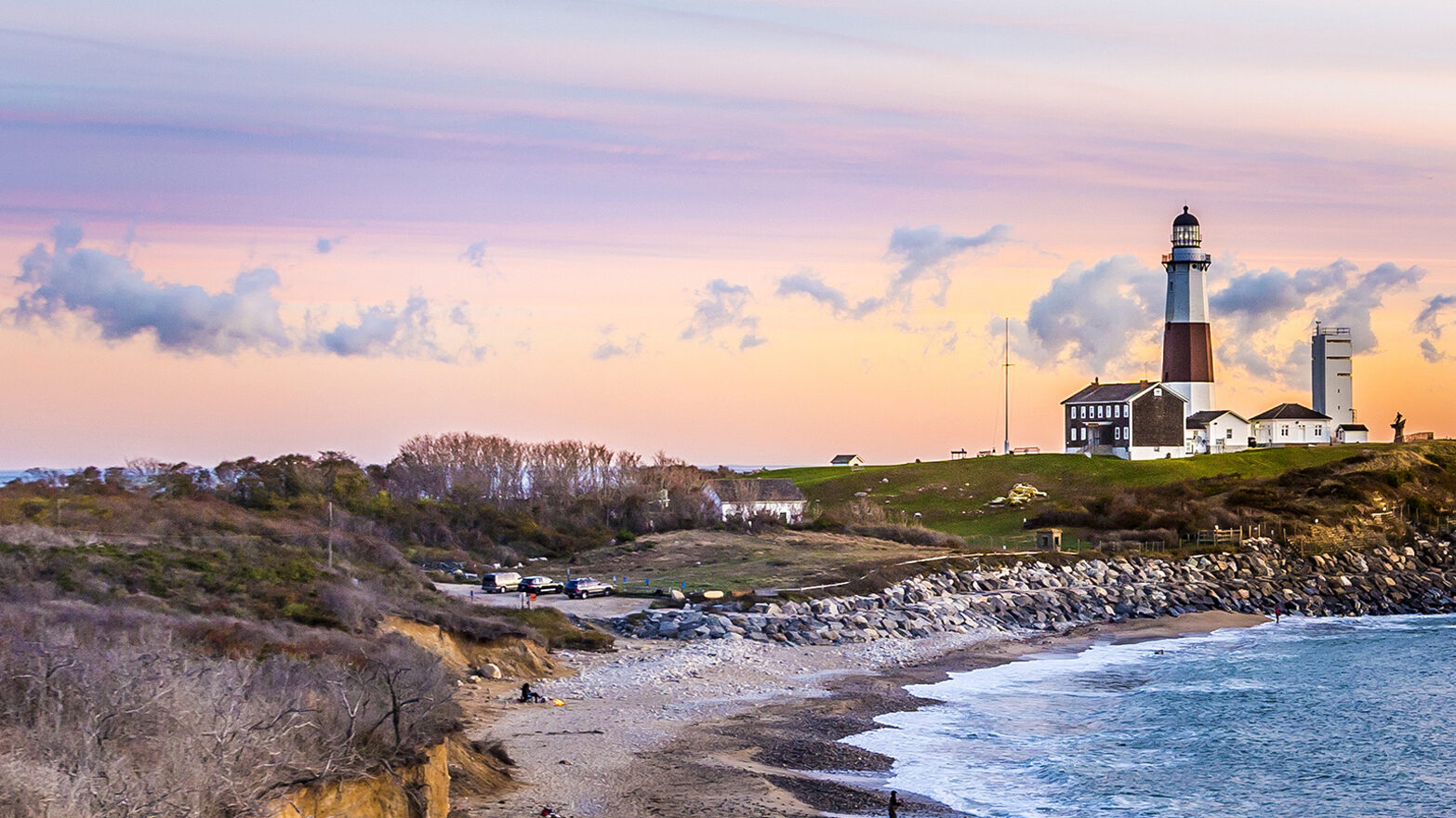 Achieving Tim’s mission would be impossible without the support of people like you.